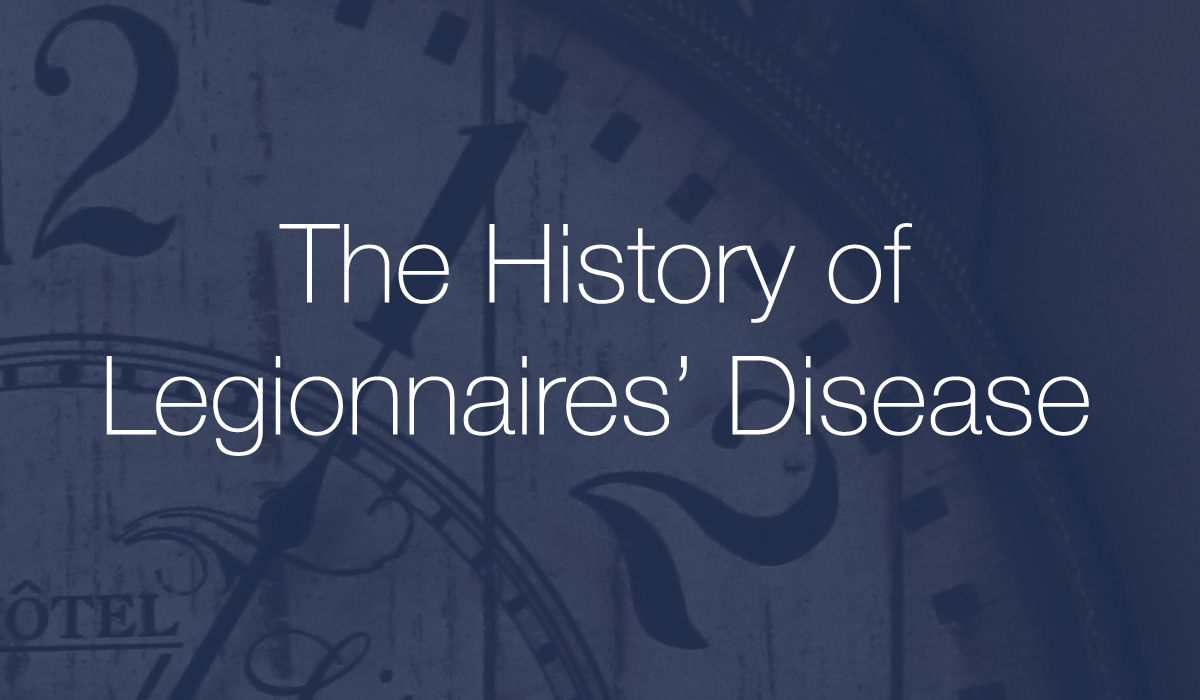 The usual initial discussions are focused on the origin of Legionnaires Disease. While some clients have done a serious amount of online research, some are at a loss to understand the history of the disease, and their surprise that, until their exposure, they had never heard of this terrible disease.

The Historical Context of Legionnaires’ Disease

In 1976, America was celebrating the bicentennial of it separation from Great Britain, and 200 years as a free and independent nation. In Philadelphia, about 4000 members of the Pennsylvania State American Legion, an organization of World War II military veterans, were gathered together with their friends and families, to participate in the Legion’s 58th annual convention. From July 21st to the 24th, more than 600 Legionnaires were staying at the Bellevue-Stratford Hotel, considered one of the best lodgings in the city and a frequent convention site. But, ironically, instead of the commemoration being one of great joy and fellowship, the event would actually go down as one of the worst medical tragedies of the 20th century.

One useful documentary shows the creation of the name “Legionnaires Disease” comes from the multiple exposures at American Legion Convention in 1976 in Philadelphia:

The cause of outbreak was ultimately theorized to be from the Bellevue-Stratford Hotel’s air conditioning cooling units. But remember at this time there was no “Legionnaires Disease” in the medical literature, and medical investigators were baffled by over 200 victims of a what appeared to be severe cold symptoms. The investigators continued to be frustrated when a total of 29 American Legion members died.

The day after the convention began, some of the Legionnaires started to become ill with pneumonia-like symptoms – high fever, coughing, chest pains, and difficulty breathing. On July 27th, an Air Force veteran who had attended the convention, passed away at a hospital in Sayre, Penn., a few miles south of the New York State border. By early August, news organizations across the country had flocked to Philadelphia to report on the mysterious ailment that had already killed 18 convention delegates or city visitors, and had other in hospitals fighting for their lives. By the time the epidemic was over in mid-August, 221 individuals had contracted the still unknown disease and 34 of them had died.

Because epidemiological studies led by 20 medical detectives from the US Centers for Disease Control (CDC), as well as scores of Pennsylvania state health workers, were unable to quickly determine the cause of the outbreak, speculation ran wild. Some thought that the epidemic was caused by domestic terrorists through chemical or microbiological means; others, that it was a CIA experiment which had gone awry; still others suggested that the whole affair was a hoax, designed to gin up support for expanded swine flu vaccinations. One Philadelphia toxicologist thought that the epidemic was due to nickel carbonyl poisoning. Other speculations included toxic fumes from photocopy machines and even an attack from extra-terrestrial forces.

The Disease’s Cause is Found After ruling out all types of medical conditions from swine flu to parrot fever, and the plague, the investigators identified victims that had merely walked in front of the hotel. The investigation of the source took a tremendous amount of time, and after six months the legionella bacteria was discovered by the CDC. The ultimate theory was that it was the air conditioning units cooling towers, but because of the lapse in time, this was never completely proven. The identification of the disease did result in the soling of many previous illnesses and deaths from what was previously an unknown disease.

In wasn’t until December 1976 that Dr. Joseph McDade, a CDC laboratory scientist, using the technique of guinea pig inoculation, was able to isolate the bacterium that caused the disease and identify it as Legionella pneumophila. It was further determined that the bacillus had apparently spread from the hotel’s air conditioning system. In April, 1977, the term Legionnaires’ Disease was first published by the CDC as the official name of the epidemic disease that had caused such a national stir that Congress had actually held hearings the previous November and the Bellevue-Stratford Hotel was forced to close permanently.

Now that the cause of Legionnaires’ disease had been positively identified, scientists began to work backwards from 1976, to find out whether similar outbreaks had indeed been caused by the same strain of bacterium. The first known, domestic epidemic of the sickness was determined to have occurred in Austin, Minnesota in 1957, when 78 people working at the city’s Hormel Foods Corporation meat packing plant developed pneumonia. The source of the epidemic was never determined at the time, but 22 years later, it was shown that survivors of the disease had significantly elevated levels of antibodies to L. pneumophila in their blood. It was further concluded that the bacteria came from the plant’s cooling tower.

In 1965, 81 patients at St. Elizabeth’s psychiatric hospital in Washington, D.C., developed pneumonia and 14 of them died. Analysis of stored serum specimens in 1977 showed that a number of patients had the L. pneumophila serogroup. The delivery agent was believed to be water from a lawn sprinkling system that was undergoing excavation work.

In July 1968, 144 visitors to, and employees of, the Pontiac, Michigan, Health Department developed a relatively mild illness that was called Pontiac Fever. It was determined, then, that the disease was not caused by any known environmental allergens, toxins or viruses. However, serum from those with Pontiac Fever was also found to contain antibodies to L. pneumophila. The spread of the disease was traced to a leak in the building’s air duct that allowed water from the air conditioning system to enter the building’s atmosphere.

Ironically, another epidemic of pneumonia at Philadelphia’s Bellevue-Stratford Hotel occurred in 1974, when 20 members of the Independent Order of Odd Fellows developed symptoms one to nine days after attending a meeting in the hotel’s main ballroom. Two of those people died.

In Spain, an unrecognized epidemic of pneumonia struck at least 150 British tourists who stayed at the Rio Park Hotel in Benidorm, a resort town on the Costa Blanca, between 1973 and 1980. The source of the epidemic was proven to be the hotel’s potable water system when changes to the plumbing, chlorination of the water, and maintenance of the hot water temperature, ended the multiyear epidemic.

Many more outbreaks of Legionnaires’ disease continued to occur in the U.S. after 1976. At least 250 patients, visitors and employees of the Los Angeles Wadsworth Veterans Administration Hospital succumbed to the L. pneumophila bacterium over a three and half year period between 1997 and 1981, before the facility’s potable water system was treated with hyperchorination.

From October 10, through November 13, 1989, 33 patients were hospitalized with Legionnaires’ disease in Bogalusa, Louisiana. In 1996, in several towns in southwest Virginia, 23 laboratory-confirmed cases of the disease were identified and almost all the victims, when questioned, recalled walking by a display whirlpool spa in a home-improvement store.

Legionnaires’ Disease Around the World

Other outbreaks were confirmed in foreign countries. In April 1985, 175 patients were admitted to hospitals in Stafford England with chest infections or pneumonia-like symptoms. A total of 28 people died. Medical diagnosis showed that Legionnaires’ disease was responsible and the epidemiological investigation traced the source of the infection to the air-conditioning cooling tower on the roof of the Stafford District Hospital.
In March 1990, an outbreak of Legionnaires’ disease at a flower exhibition in the Netherlands caused 318 people to become ill and at least 32 died. In April, 2000, 4 people died in Melbourne, Australia out of 125 confirmed cases. In July 2001, 800 suspected cases were reported in Murcia, Spain – six people died. In 2005, among 56 case patients in Norway, 10 died. In the same year, 21 residents of a nursing home in Toronto, Canada, died from Legionnaires’ disease. In all cases, the illness emanated from some kind of contaminated water system.

Although the medical community is now aware of the disease, their still remains many challenges to those victims that contract the disease and share the frustration that the CDC experienced in 1976:

Cases of Legionnaires’ disease continue to break out worldwide. Each year, between 8000- 18,000 cases are identified in the United States, alone. While the disease can be treated with antibiotics, many times it is misdiagnosed and it is estimated that only 5-10% of cases are ultimately reported. The fatality rate of Legionnaires’ disease has ranged from 5% to 30% during various outbreaks and can approach 50% when treatment with antibiotics is delayed.

The CDC provides excellent resources to learn more about the disease and what can be done to prevent outbreaks.

While the CDC may be sent the information on the exposures, the best way to notify the authorities is to contact them directly. Local, County or State Departments of Health, and the CDC can be contacted and sent information about the exposures on their website and 800-CDC-INFO (800-232-4636). If one person has been exposed there is a high probability that someone else has or will be exposed. As in many issues that we routinely believe that “the government will take care of” it is up to the victim and the victim’s family to insure that the proper authorities are notified, and the cases recorded.

If you or a family member is suffering from the symptoms of Legionnaires’ disease and want to speak to an attorney, contact us for a free consultation and case evaluation. You may be entitled to compensation.